two birds and a squirrel

The girls and I have been talking about mother-daughter tattoos.

Thing 1 has two tattoos. Words on her wrist to remind her that she’s perfect just as she is, and an ankh on her back.
Thing 2 has several tattoos. Wings at her elbows, two that represent he love of folk punk music, and the symbol for chaos on the inside of her wrist.

I have one tattoo. I got it in the spring of 1998. It’s a ring of flowers around my left ankle.
I made a promise to myself that I’d only ever have one tattoo.
A promise I’ve kept even though I came up with the idea and have designed the most perfect tattoo. Know where I want it and why.
Inside my right wrist. Maybe three by three inches. A little Earth and a crescent moon and some stars.

When Thing 1 was a tiny girl, I told her I love her more than the whole wide world. But when Thing 2 was coming to join our family, I realized I would have to say something different to her, otherwise negate the first three years of Thing 1’s life. So I have always told Thing 2 that I love her more than the moon and the stars.
I’ve sat on this idea for several years. I even created this stained glass panel to placate myself.

(The solar system is a big deal to me, because when I began to love YBW, it was ‘all the way to Pluto and back’.)

We’ve talked previously of getting tattoos that represent each other, but recently we’ve begun talking about a specific matching mother-daughters tattoo.
Now, we’re probably still going to get our representative tattoos, mine of course will be the Earth, moon and stars.
Thing 2 has always said she wanted to get a little succulent plant to represent her sister. And she wants to have Kanga and Roo’s mailboxes to represent me.

When she was a little girl, she would climb into my lap and get all tiny and say, “You’re Kanga and I’m Roo in your pouch!”

Thing 1 and I haven’t had that specific of a conversation regarding tattoos that represent each other.

But then…I got an idea!

In a group text, I put to the girls and idea for our matching mother-daughter tattoos.
I suggested a robin bird, a magpie, and then another (yet to be determined) bird.
Thing 2 shot down the magpie idea straight away. (Turns out she’s the only one that doesn’t remember her Grandmommy calling her that.)
And we talked about other options.
Thing 1 suggested a squirrel and we all loved that idea!
Then Thing 2 suggested a hummingbird for her sister.
We were on a roll, y’all!

Thing 1 did a quick doodle and sent this pic.

Of course there will need to be discussion of colors and sizing and where on our bodies this ink will go. But we have some time for that. The next time we’ll all be together for sure is in June when Thing G graduates from high school. Though there is talk of being together in March for Thing 1’s birthday.
I know I’ll want mine to be small…and off the top of my head, I’m thinking maybe on my left forearm near my elbow. But who knows? Knowing how different we three girls are, it won’t be three identical tattoos in three identical spots. Only, I do hope the art itself is identical, otherwise it’s not worth having ‘matching tattoos’…
At the moment, we’re just in the planning stages.
Momma got an idea. Girls improved upon it. Art is being created.
More conversations will happen.

It’s curious to me that after nearly twenty years of keeping that one tattoo promise I’m blowing it out of the water with not one but two new tattoos in the works.
It’s time.
I’m ready to fulfill a new promise to myself, ink that represents the two loves of my life that will never change. And ink that we can share as mother and daughters.

Guess what I saw Friday afternoon!?! 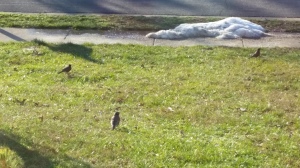 Robin birds in my front yard!!
I was so excited I could hardly stand myself!
I wrote long ago of my love of Spring and the importance of seeing the first robin of Spring in Spring is springing!.

Spring isn’t quite sprung around here, we’re expecting more snow this week.
But these birdies don’t seem to care! They were frolicking all over the yard Friday afternoon!
I went out to get the mail and this is the only bird that didn’t fly away when I opened the front door! 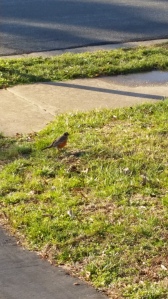 It has been a…what’s the word…curious(?) couple of weeks. I have been completely overworked at school, and editing that book, as well as finishing up my school term, not to mention still trying to process my personal feelings about my little friend whose mother died.
But(!) the curiousness is actually the best part!

Robin birds in the spring are a SUPER big deal for me, (Gee, I can’t imagine why.) but since my mom died, I’ve not seen them anywhere near as frequently or in as great of numbers as it seems I always have in the past….and if I have seen one, I’ve been with either Thing 2 or YBW only.
A part of me was relieved I wasn’t seeing them in great big amounts because it was painful, made me miss my Mommie, but a part of me was disappointed, because it is one of my favorite “rites of Spring”. My theory was “God” (by whatever gender or name) kind of knew I wasn’t ready, that was why the sightings were so few and far between, or I was with those particular people.
This year however, I have seen more robin birds than I have been able to count! They’re EVERYWHERE! Even with all this snow, they’re flying and chirping and skibbling all around on the lawns. My joy is immense at hearing their “cheerily cheer up cheer up cheerily”!
It must be time. Either I’m finally healing on own, or Mommie is ‘up there’ pulling strings to make me heal (Of course she would still be trying to boss me around.)

The second ‘wonderful’ aspect of the curious is YBW. I had a total crap day yesterday and he just happened to be home when I came home for lunch, I honestly can’t remember the last time I was that happy to see anyone. He hugged me and I just breathed in his scent and felt so much better straightaway …I was instantly safe and comforted and so very grateful. I was just enough to bolster me to get through the rest of my day.

I went to see the holistic doc and he was worried about my appearance, when I told him I was just worn out, he was worried it was the book. No, my job…the strangest thing…he offered me a job right on the spot! I thought and thought about it…made the pro and con list in my head, talked with Sundance and YBW about it then went to school this morning and met with my director (For three hours!) discussed where my ‘heart is’, made plans for positive changes. I walked into her office completely devoid of hope and walked out three hours later quite full.
Got an email with a new chapter for the book with a note asking me to let him know about the position. I’m going to decline…I know how to run the office because I did it for my doctor before I came here, and it is very seductive to receive all that free healthcare, and there are so many positives, but there are negatives, too…but ultimately, it isn’t where my heart is.
If I am going to leave my school I need to do it in a mindful way, not a reactionary way. I’m not ready yet, my time there isn’t finished.

The robin birds are singing just for me, “cheer up cheerily”.

Oh! P.S. YBW and I are going to the beach the day after tomorrow! Hello, Jewish Mother for breakfast! Yay for YBW and yay for the mini break! Your struggles may be invisible, you are not. Health, Lifestyle, Chronic Illness & Pain, Leisure, Finances, News & Reviews.