‘play(ing) it cool’ with music

I had an interesting conversation with Thing 2 Friday morning.
She shared with me that she’s working on a music mix.
(Like momma like daughter, right?)
She shared that she’s considering calling it ‘Play it Cool, Boy’ or ‘Cool, Boy, Real Cool’ 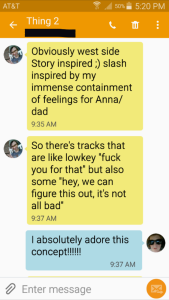 Thing 2’s friend Anna is the one that nearly died wrecking Thing 2’s car. Thing 2 has been her primary caregiver and it’s finally taken it’s toll on her. The love is there, but I think she’s having a hard time locating it in the middle of all the conflicted feelings.
Conflicted feelings about her father are…well, ongoing… 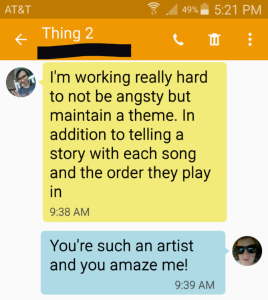 I loved that she writes of easing herself. That’s a phrase we use a great deal.
She’s being mindful of how the music impacts her mood, while saying what she needs to say. 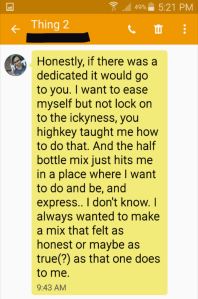 I received this pic via snapchat yesterday morning. 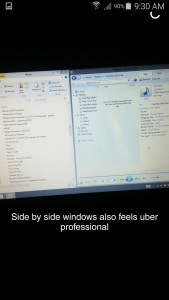 The sharing of music is a powerfully intimate expression of self. A mixtape is a mini time capsule. To listen to it is to transport you to the moment in which it was created. You put yourself in that moment and feel all those same feelings again. Thinking those same thoughts. Of course listening to it later on you pick out the flaws, you think oh, I could have done such and such instead…but that’s where you are now. The mix is the representation of where you were then. I believe that must be honored.

“Music hath charms to soothe a savage breast, to soften rocks, or bend a knotted oak.”

Dude knew what was up. 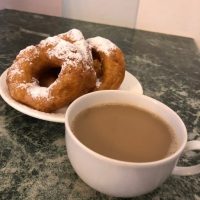 Storytelling My Life For You In An Entertaining Fashion