I probably get more worked up than necessary…

I may have mentioned once or twice that I don’t “super love” Thanksgiving.
Alas, that day is upon us again so here’s what I’m going to do. I’m going to lay it all down and walk away.

I don’t want to do what’s “required” of me today.
That would be riding in the car with YBW to get his mom and go over his brother’s house to eat the Thanksgiving meal.
Perhaps it’s because I don’t have any family. Perhaps it’s because I’ve already lived through the “this could be my mother’s last (insert holiday/milestone here) with the former husband.
I very much understand combining families means the combining of rituals. But my hope was that in creating a new family, there would be room for new rituals. This would mean a mixture of the two.
Of course I understand wanting to celebrate with your family. YBW’s mother is eighty-five years old, how many more holidays/milestones could she possibly have?
The other side of that coin is that he’s had forty-four years of celebrating with her.

He reads my words, so there will totally be a conversation about this later…but that’s not the point.

Yesterday we were invited to a holiday party at friend’s of his. This is an annual event that’s been going on for more years than I actually know. He loves this particular party and looks forward to it every year. When we were apart, he would see if I could be here the weekend of the party, which never worked most often because one of the Things would have a school commitment the same weekend. So when I finally moved here he was so excited to take me to this party! It has a gift exchange, but the thing about it is that it’s horrible gifts nobody wants. I’m not sure I understand the wasting of money like that. On something that is either going to be trashed or rewrapped for return to the exchange the following year. (Of course, I’ve never had disposable income. Everything purchased at the holidays is always well thought out and specifically for someone who needs or wants it.)
Anyway, I agreed to go even though I was so anxious about being in a room full of people when I only knew four of them. What he doesn’t understand is that anxiety I have. Being social with people I don’t know is physically painful for me. So off we go, with the caveat that I won’t participate in the gift exchange, I chose to observe, it being my first year and all.
Well, when it comes time to draw numbers, I politely decline and then YBW’s sister in law pipes up with something about how they brought an extra gift and I can use it. I thank her and decline once more. Then YBW turns and tries to convince me that it’s fun and I should participate.
That was the moment I was officially done.
When I said that yesterday, I had barely taken a breath to continue talking when he apologized.
That wasn’t the point. I don’t want you apology a year later. I want you to listen to how I feel.
He reasoned that if I had done something that hurt him I would apologize.
Of course I would. But this wasn’t the time! I was trying to express myself.
I believe he apologizes to make himself feel better. I believe this is unintentional. I don’t think he is even aware…

I swear to you there is not only a point, but also a connection…

YBW asks me if I want to go to this party. I say no, but I’ll go if you want to.
Well this turns into a very uncomfortable conversation in the car.

What we have here, y’all, is a failure to communicate.

So I reply that he loves this party, he’s excited to go and because I love him and know how excited he is I’m ready to go.
But then he says he thinks he’s “dragging me against my will” because I said I didn’t want to go.
(Ah, the dreaded catch 22.)
He doesn’t like it when I defer to him when he asks a question. e.g.: If I had said: I’ll go if you want to go. when he asked me if I wanted to go to the party then I’m not telling him what I really think/want. But when I answer truthfully to the question: Do you want to go? and the answer is: No I don’t. He struggles with that.
Which has to do with him knowing I’ve spent my whole life doing what everyone else wanted so I shouldn’t have to do this if I don’t want to.
And that is kind.

But what really happened when he heard me say no was he thought it would be a case of he could go and I would respectfully decline and not go.
(This is where my actual point happens. And hopefully you’ll see the connection.)
He didn’t want any part of that because “he went to too many parties without his wife” and that’s not something he’s willing to do.
You see, the mad alcoholic second wife, never did anything with him as a couple.

Ah ha! Now we’re getting somewhere!
He is unwilling to go without me because he doesn’t want to feel like that anymore.
OK. So why when I say: I’m happy to go with you. does he not hear that? Well that’s because I told him I didn’t want to go.

He takes the “I can’t say anything right” stance. And I counter with “No, I can’t say anything right.”
But neither is true.
I explained to him that he doesn’t like if I defer when he asks a question so I answered it truthfully. He didn’t like the answer. So then it occurs to him that he should ask a different question. Instead of do you want to go? he asks: Are you willing to go.
Of course I’m willing to go. I love you and you want to do this therefore I’m going to do it with you.

Nothing and I mean nothing gets resolved in the car ride. How very us.

Anyway…I said there was a point and a connection…I just had to go all the way round Robin Hood’s barn to get there.

We carry our baggage with us no matter how hard we try.
So I’ll go to Thanksgiving with his family. Perhaps there will come a time when we create our own rituals…

He switches holidays with his Things mother. So every other year it’s Thanksgiving or Christmas. Even twenty-two year old Thing C.
I don’t have that luxury.
Thing 1 is about to move into her own home with her fiance N. I would like to consider celebrating holidays with her at some point. Especially because within the next few years, I’ll have a grandbaby.
This will force new rituals. And they will either mean us celebrating holidays separately with our own children or we will have to figure out how to do it together.

All this drama simply to overeat?…why don’t I like Thanksgiving again?

Two days ago was the one month anniversary of us being married. I glanced as I walked past him and was filled with so much love. I stopped and told him I was so happy I was married to him.
Yesterday not so much. My instinct to run nearly overpowered me. I seriously considered getting out of the car at a traffic light. But I didn’t. I tried to be a grown up and discuss the madness.

I also do what I’ve been conditioned to do.
I defer. Because when I say or do what I really want, it bites me in the ass. I don’t blame him for that. It simply is. It was always thus.

What I struggle with is where to go from here.
I don’t feel like things get resolved. I don’t know how to make that happen, so I beat things into the ground. That ain’t fun for anyone.

Perhaps I should learn to like Thanksgiving. Maybe there would be less drama if I wasn’t such a bitch about it.
Poor YBW, he didn’t believe that I was such a raging bitch. That I’m a hot hot mess. I guess I didn’t believe he was a hot hot mess either…
Love is blind right?
I’m thankful that YBW is part of my world. However jacked up that world is, we’re in it together.

The parade is on and I’m tired of being a whiny crybaby so I’m going to watch and wait for Santa to show up.
Then Thanksgiving is over and we’re on to Christmas.
I’m holding out for new rituals… 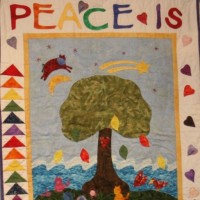 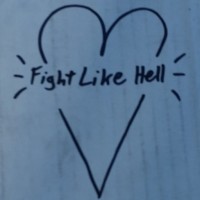