I grew up in this house. 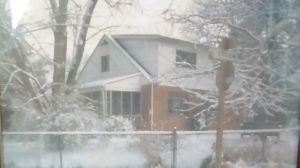 I always consider this my home, but never actually call it “home”. I only ever call it “Grandaddy’s house”.
My room was the window above the porch and the first one on the side of the house.

Grandaddy and my grandmother moved to this house from N Barton Street in Arlington when my mom was three or four. So that was 1947 or 1948. It was built in Falls Church. A post war, GI bill-sort of neighborhood called Tyler Park. The house is on the corner of a street with a big hill and a relatively flat street that dead ends into a church.

It was a great neighborhood to grow up in. We rode our bikes all around, up and down the hills. We played touch football and kickball and soccer on the open lawn of the church. We played on the playground and sledded down the hill at Tyler Park. Later on, when I was in middle school, it even had one of those brown Fairfax County Park Authority signs. (Why did I remember that?)

Last Saturday, YBW and I had an errand day that took us farther from home than normal. It started with me craving arepas on Friday. The closest Venezuelan joint is in Falls Church so I created an entire day around eating this food.
Saturday took us to Tiffany’s to leave my bracelet to have the new charm attached. Then to the jeweler to see about sorting the fact that my wedding ring is a teeny smitch smaller than my engagement ring. The goldsmith was precious and assured me it would be perfect when he was finished.

Since we were in Falls Church, I decided to take YBW to where I grew up. I know where he grew up, my girls went to the elementary school literally across the street. I’ve been there and seen the addition and listened to his stories. Even tried to find his family’s hand prints in the concrete of the end of the driveway apron addition.
I love that feeling of seeing and beginning to understand where he comes from.
It was time for us to experience that with my early life.

I told stories of landmarks that are gone or of new ones that sprang up as we drove from the actual City of Falls Church into Fairfax County but still ‘Falls Church’. I was amazed how excited I was to share my young life with him! This is where I went to second and third grade before they closed the school. It was Fairfax County’s Child Find building when I was last in this area. (About ten years ago.) But now, it has beautiful new additions and is a much needed elementary school once again.
Careful, the turn you want is on the curve in the road right across from that huge stone wall…

I forgot how narrow the streets are in Tyler Park. These mostly are yards with no driveways, so cars park on both sides of the street. So many of the little cape cods have been built out into huge living spaces to accommodate the large families now residing in them.

When we got to the top of the hill there was a car behind us and we couldn’t stop to look at Grandaddy’s house so he listened while I talked and we went down towards the church to turn around.
This is where my friend Jennie lived. Her mom left their family. It was a big deal in the late 1970s. Her grandmother still lives up the street across from the park.
Oh look! We used to sled on that same hill!! Hmm. I remember it bigger.

That whole bit in the back of the house is an addition. The original house stopped where the roofline changes pitch. It struck me as interesting that the new owners built this huge addition but left the original metal casement windows.

I have great sadness that all the beautiful trees are gone. Two huge maple trees in the front yard. The one on the left of the sidewalk I could climb high enough that I could see all the way down the hill to Graham Road. The apple tree in the side yard that had long ago stopped producing apples but stood beautiful and proud anyway. All the gorgeous flowering shrubs. Mock orange and azaleas and hydrangeas. Pampas grass, forsythia, and flowering vines along the fence in the side yard. The sweet shrub and hosta that flourished in the shade along the left side of the house.

Here’s the house from the front. You can see where the porch used to be. There are two windows upstairs on the front of the house now.

I could see people moving around inside through the storm door. I teased YBW they were feeling a whole lot of WTF? that I was leaning out the car window taking photos with my phone.
Honestly there was a part of me that wanted to boldly knock on the door, explain I grew up there and ask to be let in to look around. I didn’t though. Partly because of the language barrier. Partly because I wasn’t sure I could bear it.
I have wonderful happy memories of growing up and being loved in that house. But that was when it was Grandaddy’s house, and it’s not really his anymore. Hasn’t been since 1992.
It belongs to those new people. And with my whole heart, I hope they’re having a wonderful life there.

The wit and wisdom of a man who has neither...

A Blog here to Serve