sometimes you have to make your own light

Christmas Eve at the Cathedral was magical!
We made a quick stop at the space window before going downstairs to see the nativities. 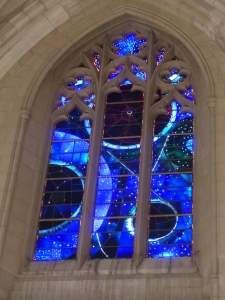 Once downstairs, we kind of went out separate ways.
I spent a moment of prayer in St Joseph’s Chapel (My favorite space in the entire building.) before moving along to the creche exhibit.
YBW said he felt a bit jaded, that because we go each season, he feels as though he’s seen them all. I don’t feel jaded in the least. Though I do feel like these nativities were not as lovely as some we’ve seen in the past. Precious few moved me enough to photograph them. 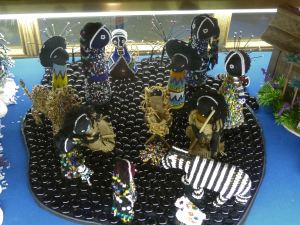 I especially liked this one from South Africa made of fabric and glass beads. No donkey and camel in this nativity, but the lion and zebra sure came to celebrate baby Jesus!

Thing 2 came to find me and asked if I’d lit my prayer candle yet. I hadn’t, so she took my hand an led me through the gorgeously colorful mosaics of the Resurrection Chapel to the Cathedral Center for Prayer and Pilgrimage. This is the teeniest little room with a spiral stone staircase, a few wooden chairs along the wall behind a small kneeling alter in front of the candle table.
I hugged her tightly and told her this was where I always lit my prayer candles. She nodded and whispered that she just knew it.
She had been there before she found me, I could see the freshly lit candle and sense her presence. She sat in the corner behind me and I kneeled for a moment before using her candle to light mine. 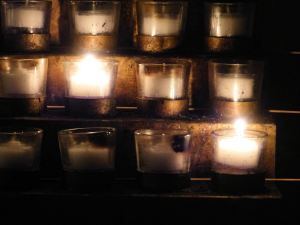 God is in us. Always. There is no need to be in a house of worship to feel that connection. But in that moment in that tiny dark room I felt it more keenly than the way I carry God with me every day.
Perhaps it was being there with my baby. The one I always pray for in that particular room?

We left the Cathedral for the ellipse where the National Christmas tree was waiting for us.
Thing 2 and I drove past on our way home from the Nutcracker earlier that week. Honestly this tree has the prettiest lights I think I’ve seen in my entire life. But none of the trees were lighted this Christmas Eve afternoon. (Pourquoi pas?)
Thing 2, of course, was all about the trains. Thing 1 and I dug around for pennies and we took turns tossing them into baskets on the trains as they passed by. (We made more than we missed, go us!) Thing 2 mused what the change was used for. I teased that it was to pay the electric bill so the trees could be lit. Then she decided she would want to be one of the people who worked there with the trains. She could keep them running smoothly and gather up the change on the grass and hand it to all the small children standing along the fence so they could try their luck as the train cars went by. Thing 1 and I agreed that it would a great job for her.

Finally, we were tired and ready to head home. YBW got this shot of us walking together.

4 thoughts on “sometimes you have to make your own light”