Yesterday at 11:16 I received a text message from Thing 1.
This photo and these words.

She said after they took that pic of him lying in the yard, they went for a walk, and over by their pond he wandered off into the woods, as he sometimes does. A bit later on she went to get the mail and found him in the road. He’d been hit by a car.

Mo was a miracle for our family at at time when we were in great change. The Things dad and I had just separated and the girls were living in two different places for the first time in their lives.
Thing 2 was obsessed with going every Saturday to adoption day at the pet shop. We went religiously. Never to “get” a pet always to look at the dogs and cats.
One particular Saturday we were walking past the dog crates in which all manner of dog was barking or acting a fool. With the exception of one dog. 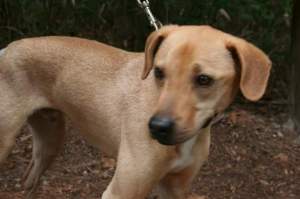 This sweet dog was lying quietly in his crate completely ignoring the chaos around him. He looked up when we stopped and his little nubby tail started to wag. We three girls were enamored by this sweet boy.
(Y’all don’t know this about me, but I don’t like dogs in any way shape or form. I’m not a hater or anything, I just don’t like dogs.)
But this dog. This sweet boy. I feel in love with him. So did the girls.
There was much conversation about how we might adopt Mo. We liked that his name was Mo, not only did it suit him, it also went nicely with our last name.
I walked away from the girls and called their father at work. I told him that the girls were going to call him about a dog. He heaved the greatest of sighs. Then I said, “We need him.” That gave him pause. He knew that if I said that, this must have been some dog.

Well, we ended up adopting sweet Mo and he became part of our family. He mostly lived at their father’s house, but sometimes he lived with me too.
He was the sweetest, most neurotic thing you’ve ever seen. He had mad abandonment issues and fretted when we’d leave him to go to school and work.
Thing 2 took quite a shine to him, she researched online, and in books from the library, how best to love this quirky boy. She was enthusiastic to take him to the dog park to play with other dogs.

She was enthusiastic about taking him for long walks, especially down to the riverfront park where we could walk along the canal. One time, Thing 2, Mo, and I arrived just in time to watch the authorities pull a body from the river. Good times.

Mo was such a good loving dog. He was happy to belong to our weird family. We loved him so.
When it was time for me to move from SC to VA, Mo would lie on his big green pillow (which he stole from Thing 2’s bed) and keep me company while I packed box after box of books.

Just this fall, Mo and his “little sister” Sweetie moved from the Things father’s house to Thing 1 and Husband N’s. Being on the little farm gave them so much more freedom. They were able to rip and race and be silly doggies without disturbing any neighbors.
Of course, it was an adjustment. The dogs missed their dad. They missed Thing 2. But they were so happy with Thing 1 and Husband N. They were happy to be together and loved.

I’ve been hit by waves of sadness since I talked to my daughter yesterday. The tears come out of nowhere and choke me. I couldn’t breathe for the weeping when I told YBW the news last night. I’ve cried alone, I’ve cried with YBW. I’ve cried on the phone with each of my babies.
That sweet dog was more than just a dog we adopted one day. He was a gift for our family. We were able to love him and each other through the worst times and come out the other side better off.
I really do not like dogs. Mo is the only dog I’ve ever truly loved. He was so special.

When I was more calm after sharing the news with YBW, he got angry. He wanted to know how fast one must drive down a dirt road to hit and kill a dog. What kind of “stupid Georgia hillbilly” didn’t stop to help, but just kept driving.
His anger surprised me.
But he’s right.
There’s no excuse for that kind of driving. There’s no excuse for Mo’s death.

Thing 1 felt so responsible, felt that she failed at keeping Mo safe for our family.
I told her that it wasn’t her fault. That none of us blame her. That we’re so sorry it happened and she has to live through it.
Turns out Thing 2 told her the same thing…nearly verbatim.
She told me her father said that Mo was an old dog, thirteen or fourteen years old. And wasn’t it wonderful that he’d had such a lovely day? That he was healthy enough to run and play and lie in the sun. That he left this world a strong dog, not an old sick dog.
My heart thanks him for being a good dad to her in that moment.

Thing 1 and texted a bit last night when we no longer had the will to speak.

I called her a little while ago to check on her.
She told me she wished she hadn’t found him. That it would be easier for her to deal with if she hadn’t seen him. I understand that on the deepest level. I told her how proud of her I am. I told her she was a real adult yesterday, and that I understood it sucked more than anything. But she did it. She’s doing it now. She’s living though the grief and pain. She’s not looking around for someone more “adultier” than she is. She’s just doing what it takes to get through. That’s adulting.
She asked me to hug YBW and thank him for his anger. She said she wants to hang signs on the road. “Thanks for killing my dog, you f**king asshole.”
She has moments of tears, and moments of anger.
Mostly, she has love.
We all have love.
The love of a dog called Mo.